Tina Fey has this really great quote "Say yes and figure the rest out later." At least it goes something like that. This is the approach I've always taken to my work and so far it hasn't lead me astray.

I had previously worked with Mason Zgoda on styling for what was supposed to be her album cover. Our meeting was sort of a freak accident. A makeup artist that had collaborated with someone I knew called me up because this particular client needed 1960's French It Girl--aka one of my favorite things in the world. We worked together on that first project and fell in fashion love. Shortly after the photo shoot, she hired me to style her and do the props for her music video "Where Else Can I Go" I designed a dress and collaborated with a local seamstress--it was a beautiful late 50's inspired yellow dress paired with turquoise pumps. She looked like a dream! However when she saw the final product from our twelve hour workday, she was less than pleased.

It was then that Mason asked me to direct the do over of this video as well as her next single's release too "Joey Ramone" I didn't hesitate to say "YES!" and figure out the rest later. Did I mention I agreed to do these AND do the creative direction for her album cover photo shoot all within one weekend? Was I crazy? Yep. But I made it work! I taught myself how to write a music video treatment and script and had a proposal that everyone agreed on. Now it was time to initiate it!

First was the easy part. We did the photos for her website, album cover, and general content. The photographer was a new photographer named Abi Lewis. I really feel like she captured the essence of what we were going for so beautifully. Lisa Proctor was my right hand and Hair and Makeup all weekend.

Here are some of the behind the scenes from the photo shoot!

These two dresses in particular were a collaboration with A Lady of the Lake. It was a dream to design with her.

We shot nearly nine looks that day and left to rest. The next day was the BIG video! This was a super prop heavy based video that needed to look like one continuous shot. Dana Olsen designed the oversized set pieces. They took up my entire front room and were like playing a game of oversized tetris loading them into my car! The choreography of this video was the hardest. Everything had to flow just right or we had to start all over again. We still managed to get the whole thing done in less than two hours! And she got to wear the yellow dress I designed again! Stacie Huckeba was the videographer on both of these projects!

Last but not least was the video for "Joey Ramone" This single is coming out in time for Valentine's Day. The concept was to do a 60's French take on the ole "Anything you can do I can do better" I had the idea to do an all girl band. Christene Moad was the perfect choice for a bass player--she's actually wearing the Taylor Gayle suit from the last shoot I did with here if you recognize it! It was a very stylized performance video. Her chick drummer might look familiar too!

All in all this weekend was a huge success. We have products that I am SO incredibly proud to put my name on, and I was able to help out an artist that I really love and believe in. Creative directing and styling for these artists is a blessing that I don't take lightly. Stay tuned for the videos in 2018! 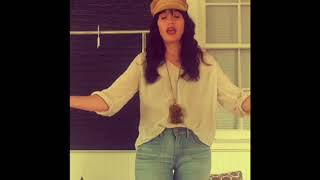 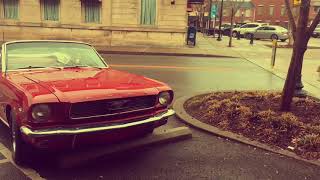 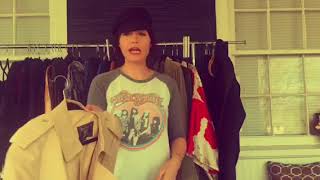